(Senate) Bill S.2088 An Act making community colleges in Massachusetts free for residents of the state  Link to State Site for bill.


(House Bill) H.633 By Mr. Gentile of Sudbury, a petition (accompanied by bill, House, No. 633) of Carmine L. Gentile and others for legislation to make public higher education free for residents of the Commonwealth. Higher Education.

References:
Hearings and Events
at October 30, 2017 No comments:

Time to Replace Fossil Fuels with Solar and Wind

October 26th, 2017. I went to the state house today to testify in favor of Bill H2698. The H means it is a House of Representative piece of legislation. The bill was presented by Kenneth I. Gordon from the 21st Middlesex district (). The hearing was conducted by the "Joint Committee on Telecommunications, Utilities and Energy". The bill is "An Act protecting ratepayers from gas pipeline expansion costs". That means if the gas company needs a pipeline, they pay for it not us.

My comments to the committee were of a general nature:

I have a seventeen-year-old car. Everyone who sees it asks "When you getting another car?" It needs more work that it is worth.

The natural gas industry is in need of too much work. According to the Environmental Defense Fund, some of the pipes in are over 50 years old. The pipes leak. Leaking gas is an environmental problem. Methane is 25 times better at trapping heat than carbon dioxide. Burning natural gas emits carbon dioxide and toxic chemicals that are poisoning living things and cooking the planet.

It time to trade in that aging fossil fuel technology for something new and exciting. gets half its electric energy from wind turbines. gets 8% of its energy from solar power. These new technologies are cheaper and cleaner. Wind and solar power are creating many local jobs that we need. 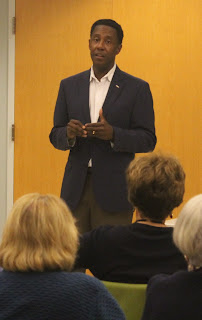 https://en.wikipedia.org/wiki/Parkinson%27s_disease
long-term degenerative, death of cells in the substantia nigra, a region of the midbrain,

Cost effectiveness of preventing falls and improving mobility in people with Parkinson disease: protocol for an economic evaluation alongside a clinical trial

Resource use and costs in a Swedish cohort of patients with Parkinson's disease.
The mean total annual cost for PD in our sample approximated SEK 124,000 ( approximately USD 12,400; 2000


http://onlinelibrary.wiley.com/doi/10.1002/mds.25292/full
The current and projected economic burden of Parkinson's disease in the United States

We estimate that approximately 630,000 people in the United States had diagnosed PD in 2010, with diagnosed prevalence likely to double by 2040.

Do dopamine in brain

Drugs will help, for a while

10 years to live, or maybe no effect

What I do?
Why boxing?

Ruth saw interview with leslie stahl. Her husband has it.

It's reducing the tremors in my left hand. Less tripping.

Straifing. Always know where my feet are. Demonstration.

Keep walking
If you know someone with movement issues, take them for a walk.
Walk and talk.
Whole foods shopping, talking, small carts
Encourage people to join an activity.
Social is important.

Neurology Today
WHY EXERCISE HELPS PEOPLE WITH MOVEMENT DISORDERS
Ivan Bodis-Wollner, M.D., the director of the Parkinson's Disease and Related Disorders Clinic Center of Excellence at the State University of New York at the Downstate Medical Center, believes that dance therapy helps because it works the body as a whole, not as an isolated muscle group. In addition to feeling support from the group and from feeling better from doing exercise—which in itself produces dopamine, Dr. Bodis-Wollner says—there's another benefit as well.

Movement disorders are clinical syndromes with either an excess of movement or a paucity of voluntary and involuntary movements, unrelated to weakness or spasticity

Here's the Article:
Our leadership in Washington is continuing their attack on health care. We should ignore them as much as possible. Massachusetts has few natural resources. If we want to thrive, we need to attract growth tech industries. We will. When I walk around Boston, it feels like something exciting is happening. We have a concentration of well-educated people with diverse backgrounds. This is a recipe for growth and innovation.

However, health care costs are a drag on our competiveness. Denmark which is about the same in population spends about half what we spend. Even if the federal government leaves the Affordable Health Care Act unchanged, we still have a problem. We are an innovative state! It is time for use to take health care to the next level.


The Gas Leak Allies are finding solutions for the gas-leaking pipelines buried in our neighborhoods. They are making real progress. The summit highlighted their persistent effort in learning how to work together, collecting data and solving technical problems. In a time when people seem to be polarized, it is nice to see real progress in solving difficult problems.
at October 09, 2017 No comments:

The Future of the Gas Leaks Campaign, Mothers out front

Attended this in the afternoon.
http://www.mothersoutfront.org/fix_massachusetts_gas_leaks

I attended in the morning.